The Blue Moon Blessing Essence is finally out in the world.  It feels so good to be able to promote it and shout about it.  This essence has been cooking inside me for such a long time.   I chose not to speak of it or its manifestation until I knew clearly that there was no going back, and that it was almost imminent. 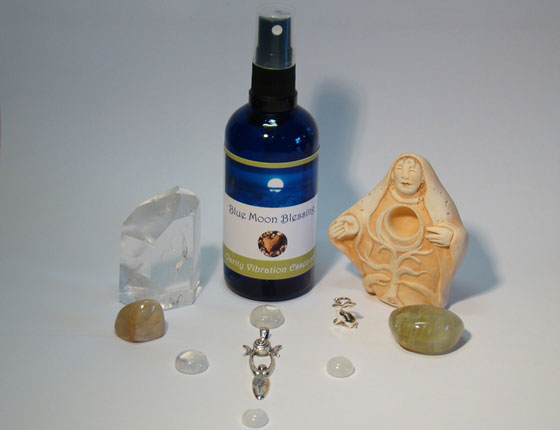 The inception was in April when I attended the first Moon Mother training with Miranda Gray for working directly with the Womb Blessing energy.   When I left for the weekend to go to London I had the compulsion to take a beautiful piece of terminated quartz from my altar especially for the training, I cleansed it with Sage and Palo Santo, both are sacred herbs used traditionally for cleansing and I asked for the quartz to hold all the loving, healing and transformative energy from the weekend. Once the crystal was programmed to retain the energy, it was wrapped carefully in red silk until I arrived at the venue.   I set the quartz up on a small little altar in the room over the weekend to do its job.  At the time I was just reacting on impulse, trusting my inner guidance, I knew that I needed to programme the crystal and work with it.

Each Womb Blessing, either a worldwide Blessing or working directly with clients, the quartz took centre stage on the altar to help hold the energy, afterwards I carefully and lovingly wrapped it back up in the silk to protect it. I was internally visioning into how the crystal could be used for an essence.  I had a sense that it wanted to be made for others to use, not just for my personal use within my practice, as all my other essences that I have made over the last twelve years have been.

Miranda came and stayed with me in Bristol in August for the Moon Mother training which I had organised for the weekend.  The sureness came about me making the essence through a conversation I had with Miranda, she voiced that I should make an essence for the Womb Blessing work.  What she saw in me spurred me on passionately, knowing that I had already laid the warp of the Blue Moon Blessing Essence on the loom for it to manifest.  I knew this would be my first commercial essence, and that I had to get the energy out to share with anyone wishing to experience it.

Feeling into how this needed to be born was very exciting, especially as it was a complete secret and I could feel the holding within me build.  The Womb Blessing Quartz meanwhile sat on my altar in the lap of my large beautiful silver statue of Tara, whilst the rest of the threads came together for the whole essence.  I knew it needed to be a lunar charged essence, as the Womb Blessing work is directly calling the purity and grace of the moon down, working with the beautiful energising silver light. 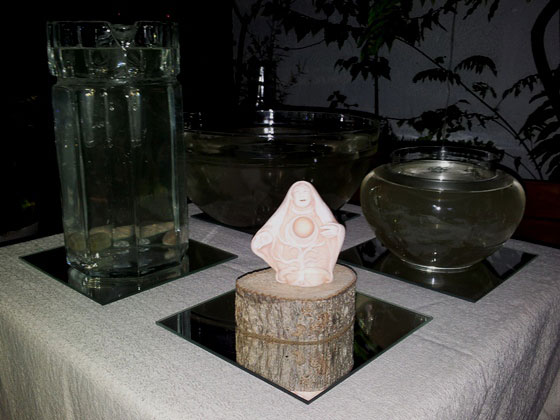 What came to me through my meditation practice each day were the makings and ingredients of the Blue Moon Blessing Essence, initially manifesting as an atomiser.  I knew I had to work fast as the coming full moon was the August full moon which was the Blue Moon.  Some argue that the blue moon is something of a phallusy, due to the change in yearly calendar.  When the Roman calendar came about, it changed from 13 lunar months to 12 months.  The Romans decided they would no longer follow the rhythm of the moon as guidance for the months and that they would mathematically work it out, adding odd days here and there.  Some would argue that we should be working with the lunar calendar rather than the system currently in use.  In the current system the Blue Moon is seen as the odd one out, the thirteenth moon which has its own connotations, which I won’t address here.

However the essence was made on this thirteenth full moon, in Pisces. This meant the energy of the moon would influence the making of my essence.  Pisces energy is one of a deep watery nature, intuitive, feminine and sensitive.  The moon was conjunct Chiron, a planet which is known as the wounded healer.  Conjunct means that the astrological planetary influence is an aspect that emphasizes and brings together the energies of the planets involved; therefore the energy of the wounded healer was aligning with the deep emotional waters of the intuitive Pisces.  Some believe this aspect had an ability to enable and support people in facing the core issues they were born to resolve and offer them the opportunity to release them.

The essence was coming together beautifully.  I was inspired to source traditional moonstone and rainbow moonstone, four rounds in differing sizes, used to symbolically represent each aspect of the moon.  The added Silver Goddess and Silver Hare make this essence truly magical.  For me this essence really plugged into what it means to embrace our true femininity, and claim the missing aspects back into the self.  Calling the shadow aspects back to balance the distorted image and constancy of light that all women try to fit themselves into, the darkness that slips through when we are tired, premenstrual/menstrual or deny our needs in place of another’s.  The message of embracing these missing pieces are key to our healing as women, for our own wellbeing, but also for the balance of our communities and as a legacy for the coming generations.

The final ingredient in the blend of vibrational essences for the Blue Moon Blessing was the String of Hearts Rosary Vine which was so delicate, yet strong and courageous.  It brought the sense of protection and comfort in the dark void of creation, honouring the void within all of us as the birth place of the self.  Listening and holding in the stillness to witness the birth of our creative babies, be those real children or our heartfelt projects, which we invest our dreams, visions and energy into. 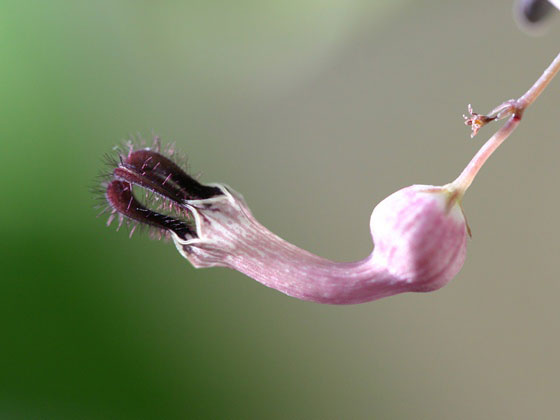 The essences were set out tocharge under the beautiful moon, where I played the MP3 of Miranda reading theWomb Tree meditation.  Afterwards I actively called the loving healing energy down and channelled it into these essences. They were then collected before dawn the following morning.  I felt so charged from doing this work and immediately made the blend I was guided to make so that I could begin to use it and connect with the energy.

I have found the Blue Moon Blessing Essence to be hugely stabilising and supportive.  It is grounding and soothing and has many times given me the sense of being held in the arms of the Divine Mother, the warm embrace where you sense all is well, that things will unfold in their right time and in the correct order, just as they are supposed to.

I feel honoured and blessed to be able to offer this blend out into the world and I welcome any feedback about experiences of using the essence.  I am eager to hear how it feels for others to use it personally for support, with healing work, with Womb Blessing work or space clearing.  Making this essence and responding to the calling to make it available for anyone to use, has prompted me to make all of the essences I have previously made available. It feels so incredible to share all of this wondrous healing energy with everyone.  May it soothe and ease, enlighten and hold you in treading your unique paths.

More information on the Blue MoonBlessing Essence can be found here